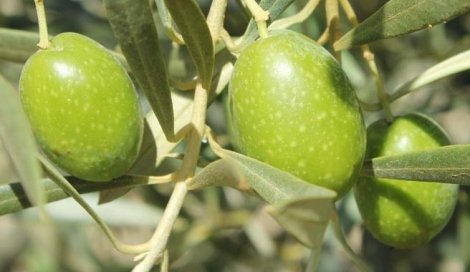 Green olives with bone are a food without cholesterol and therefore its consumption helps keep cholesterol, which is beneficial to our circulatory system and heart.

The process of table olives is the result of the combination of tradition and modern technology.
Quality, selection, careful preparation, everything is controlled. Only clean the working tape will leave the market. The contributions of researchers and technicians have resulted in a technologically advanced industry in constant evolution, capable of offering a high quality product appreciated worldwide.

Historical Origins.
The origins of the olive tree reaching far back in history. The first written reference to this plant is included in the book of Genesis. Originally its cultivation spread throughout the Mediterranean area, and surrounding areas, covering Europe, Africa, Asia Minor and even India.
The expansion of cultivation accelerated by Spanish settlers who spread throughout the New World. Olives, olive fruit was initially used for oil extraction, also known references, in the first century AD, that indicate consumption as table olives.
Our table olive exports have experienced major changes in recent years. On one side, next to the traditional Sevillian style marinated olives have emerged for new variants market requirement that considerably expand the diversity of supply, also has produced a series of technological advances that must necessarily be taken into account.

Mesa varieties used.
Olive cultivation has advanced in recent centuries further improving fruit and offering a variety of species. In Spain, a large number of cultivated varieties, some of which are:
Panel A):
Manzanilla de Sevilla: the table olive variety most widely internationally because of its productivity and fruit quality. In Spain it is found with the name “Manzanilla” in the province of Seville and the “Carrasqueña” in Badajoz. It has a high ratio pulp / pit and acceptable content in oil when targeted at mill. The fruit is black in maturity, spherical or ovoid, symmetrical, with the maximum diameter focused, medium-sized, rounded apex, without nipple based truncated penducular cavity circular, narrow and deep, with maximum cross section circular.
Gordal Sevillana: internationally known under the name of “Sevillano”, is a prized cultivar primarily by the size of its fruits that reach an average weight of 12.5 grams. It extends its cultivation in Andalusia low. It is a large fruit, between 100/120 fruits per Kilo. His appearance is cordate, green with white spots. Its oil content is low, so that consumption is dressing, being widely consumed worldwide.
Azofairon and Morona.
Panel B):
Hojiblanca: Its cultivation covers much of the provinces of Cordoba, Malaga, Seville and Granada, late maturing. It is highly prized for its development as olives and black olives in brine. Also known as “Lucentino”, appreciated for its resistance to calcareous soils. It has dual purpose and is considered very suitable for dressing in black type “Californian” by the firm texture of its flesh. The fruits have a low oil content, although appreciated for its quality, and high peel strength difficult to harvest mechanically. The fruit has a violet coloration black, elliptically shaped and large, with the maximum diameter centered, with rounded apex, without nipple, with stylar point centered, stalk cavity circular, wide and deep, with maximum cross section circular.
Cacereña: Similar in appearance to the Manzanilla, but lighter in color. As the name suggests extending throughout the province of Cáceres and Salamanca. Its main processing is seasoned black olive.
* Verdial: Grown mainly in Andalusia consumption goes to dressing in green type.
* Other: Cañivana, Picolimón, Gordalilla, Aloreña, Rapazalla, beaked, and Cuquillo Cordobí.